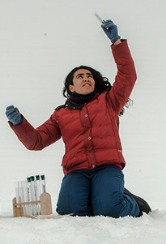 Project that talk about the importance of water, the cold and the Antarctic´s heart. A series of actions were realized resulting in five video pieces accompanied by contextualized objetcs.

The media language is crossed by a poetic character, which sensitizes the viewer.